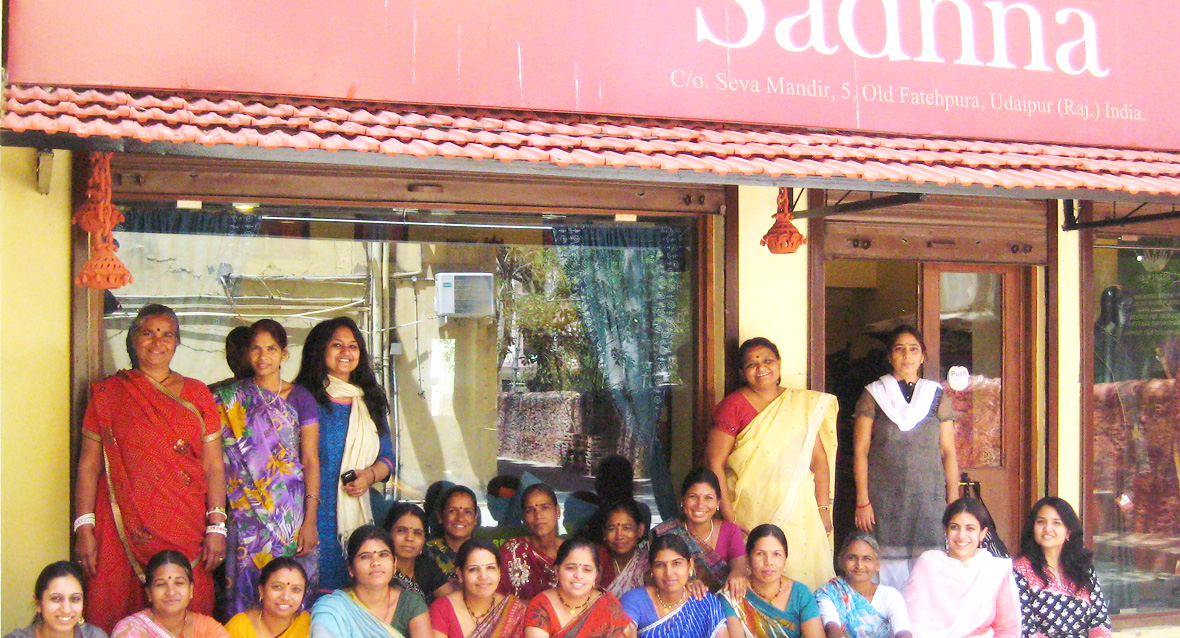 How did a women’s collective in Udaipur come to capture the shopping imagination of global tourists making their way to India every year and becoming an inspirational center for empowerment of women ?

The world’s premium travel guide, Fodor’s, recommends Sadhna thus to its international travelers — “One of the oldest NGOs in India, working for the advancement of the village poor, Sadhna works with rural women in the Udaipur district and trains them to produce traditional appliqué work on cushion covers, bedspreads, silk stoles, bags, kurtas, light quilts, and jackets.”

FabIndia — India’s largest private platform for products made from traditional and hand-based processes — is a major partner of Sadhna in displaying and selling its products nationally. Sadhna’s line of clothing and accessories has also made a global debut — a testimony to superior quality and diligence.

Sadhna, as an idea, was born in 1988 to generate alternative income for women in and around the urban and rural areas of Udaipur. A massive drought in the region forced the menfolk to migrate in search of work and incomes of households dwindled considerably. The women were forced to look for other avenues of income in order to supplement the meager resources.

Traditionally faring from a non-agrarian society, Sadhna chose handicraft as the core revenue earning activity for the women. Udaipur is a premier tourism destination attracting millions of tourists to its famous lakes and magnificent history and culture. This large tourist base provided key potential for handicraft sales and thus the flagship store of Sadhna at Old Fatehpura was set up. Today, it has three other outlets — a second store in Udaipur, another in Delwara near Udaipur and one in New Delhi.

Sadhna was initially set up by Seva Mandir — a leading social voluntary organization in Udaipur — and later, in 2004, it was registered separately as an independent mutual-benefit trust owned by artisan members to help it evolve into a self-sufficient small-scale unit. The individual units have 10 to 20 artisans each and 49 such units are spread across 16 locations in the Udaipur area totaling 700 artisans today.

In 1988, 15 women, some of them manual scavengers, formed the first group of artisans trained by Sadhna to make handicrafts. A signature style incorporating patchwork, appliqué and tanka embroidery, inspired by local traditions, became the hallmark of their products. Every owner-member (with an equal say in decision-making) has to undergo a three-month training program in the nuances of finer stitching before graduating to actual work in the unit.60% of the annual profits go to the artisans directly.

Sadhna’s members are mostly in the age-bracket of 25 to 60. The women, who came from villages that conventionally banned them from sharing public spaces, today run the business units on their own — taking responsibility for the sales and finance and attending exhibitions of their products across the country. Totally independent income-wise because of the supplemental money, they can afford education for their children, ensure good nutrition and medical care for their family and also join the decision-making process in their own homes and their community’s self-governance.

Sadhna’s mission is to double the artisan incomes and build a strong brand over the next 3 years. Sadhna, as a high-impact social enterprise, has empowered ordinary women from impoverished homes — building their self-esteem, creating awareness of their responsibilities and rights, helping them break gender-barriers and enabling them to be role models for other women in their society.

Sadhna, Udaipur – A Portrait of Hope and Determination