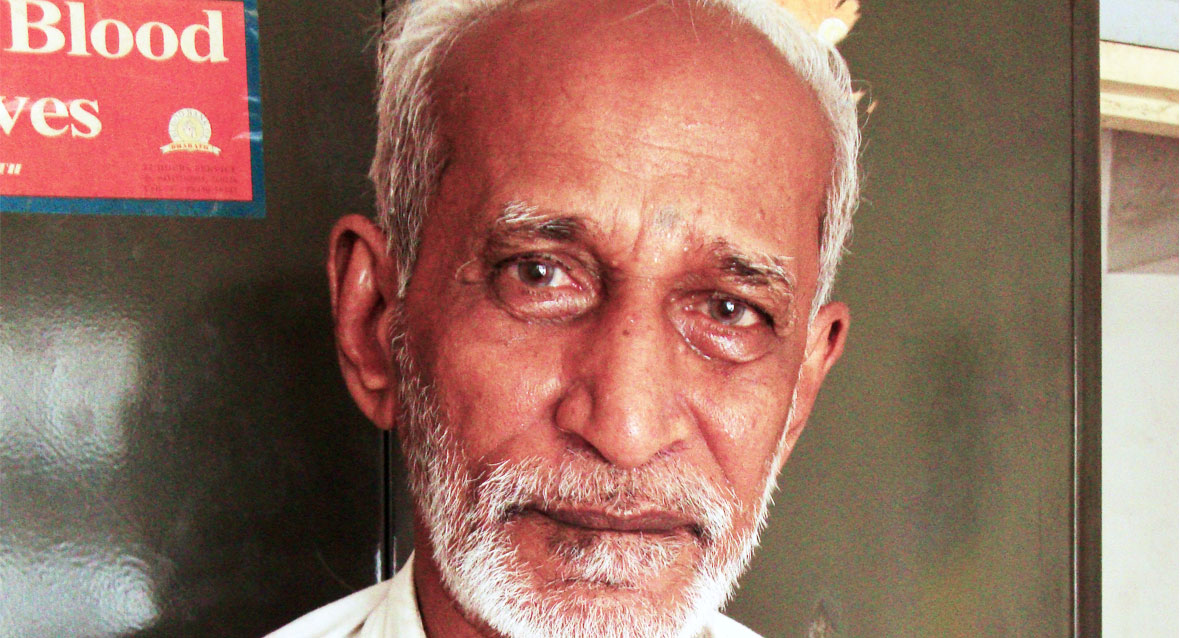 If Paalvannan Kalyanasundaram is to be believed, the path to true happiness does exist. According to him, his mother advised him quite early in life about the three ways of attaining a happy life :

74-year-old Kalyanasundaram’s life has been a story of boundless giving and compassion — of how an individual can enable remarkable transformation of impoverished lives around him and set an example for society to emulate.

He has contributed not just one-tenth but his entire salary, every month, for all the years he was employed as a librarian. And he didn’t stop with that either. He also donated the Rs. 10 lakh ( 1 Million ) pension arrears he received on his retirement to the Collector’s Fund.He gave away his entire ancestral property and spent his life on street pavements — an act that helped him identify with the life of similar street dwellers. His pension too now goes to charity every month.

And how did he meet his own expenses all these years? He moonlighted as a waiter/cleaner at a local restaurant in return for 2 meals a day and little money to meet his frugal needs. He remained single since he felt it would have been a distraction in his service to humanity.

Born in Melakaruvelangulam — a remote village in Tirunelveli, Tamil Nadu — Kalyanasundaram’s life of magnanimity started at a very tender age. The village lacked basic amenities and he hiked 10 kms everyday to school. Most children from his villagecouldn’t afford the Rs.5 for admission, and thus it was a lonely walk to school for Kalyanasundaram. Being from a landlord family, he used all his pocket money to pay the fees of the poor children and bought clothes and books for them — thus making his daily walk more interesting and less solitary in their company.

Later, during the 1962 war with China, he heeded the call of Prime Minister Jawaharlal Nehru to donate to the National Defence Fund and gave away his gold chain weighing 65 grams to the cause—a gesture that would move Kamaraj, the then Chief Minister of Tamil Nadu.

Subsequently, he met Balasubramaniam, Editor of AnandVikatan, a Tamil periodical, who opined that donation from one’s ancestral resources didn’t qualify as charity. True philanthropy lay in giving away one’s own earning — the obvious attachment testing one’s sense of benevolence sufficiently.

Kalyanasundaram went on to be a gold medalist in Library Science, later earning three Post – Graduate degrees and three Diplomas, and led an illustrious career as a librarian at the Kumarkurupara Arts College at Srivaikuntam.He won the Best Librarian Award from the Indian Government while also being chosen as one of the Top 10 librarians of the World, an international honour.

In his 35 years of service at the College, he donated his entire salary to charity.For this altruistic act, he was awarded the Man of Millenium award by the US Govt recently along with prize money of Rs 30 crore ( Rs 300 million ) which he promptly contributed to a charitable cause. Recognising his acts of compassion, Tamil movie superstar Rajnikanth adopted him as his father, inviting him to live with him all his life.

A Gandhian, Kalyanasundaram started a charitable organization, Paalam, meaning bridge in Tamil—an obvious reference to the empowering connection between donors and beneficiaries. Paalam offers opportunities for everyone to serve the community — irrespective to their caste, religion, language, region and creed. It has made stellar contributions for rehabilitation of cyclone victims in Tamil Nadu, Andhra Pradesh and Orissa and also earthquake victims in Maharashtra and Gujarat.The United Nations(UN) also honored Kalyanasundaram as one of the Outstanding People of the 20th Century.

Charity doesn’t stop with one or two selfless acts of kindness. It is a lifelong endeavor, and Kalyanasundaram has never forgotten his mother’s words. Lest the benevolence be deterred by his eventual death, he has gone on to pledge his body and eyes as well to the Tirunelveli Medical College, all in the interest of science. A final act that sums up a consummate life lived for others.

A Video documentary on Kalyanasundaram ( Tamil )