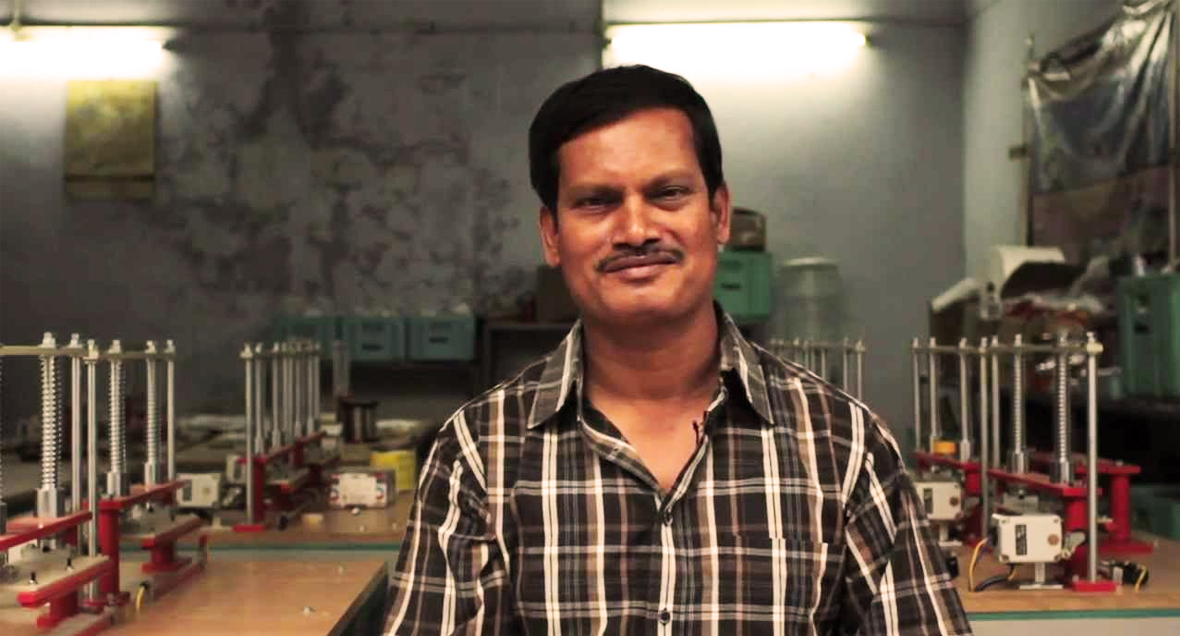 Arunachalam Muruganantham is used to being called a sex-crazed pervert. He is also never affected with the adulation that comes from being TIME Magazine’s “100 Most Influential People in the World” in 2014, rubbing shoulders with President Obama, Narendra Modi, Jeff Bezos and the like.

He is also the Menstrual Man of India, who conceptualized, executed, and successfully proved that sanitary napkins could be made affordable, and made by anyone, to world-class standards. His processes also ensure that women are made the primary stakeholders in the revenues that are generated off this taboo domain in Indian popular culture. Arunachalam Muruganathan is a school drop-out who brought dignity, empowerment and enrichment to Indian society, fueled by deep-rooted determination and an extraordinary sense of caring.

According to a report by the market research group AC Nielsen, titled “Sanitary Protection: Every Woman’s Health Right” from 2010, only 12% of India’s 355 million menstruating women use sanitary napkins (SNs). Over 88% of Indian women resort to shocking alternatives like unsanitised cloth, ashes, husk and even sand. Reproductive Tract Infection (RTI) is 70% more common among these women. The biggest barrier to using a sanitary napkin is affordability with around 70% of women in India say their family can’t afford to buy them.

Deeply pained by his wife’s plight with how women in India have had to struggle to control their periods without modern luxuries, Muruganantham’s methods to learn and tackle the issues were, if not unorthodox, dangerously on the fringes of sanity for a normal fellow-villager. For the school drop-out-tuned-welding-shop helper, it ranged from collecting used sanitary pads, to wearing prototypes and testing it with bladders made of animal blood, to even making his siblings try them out and hound them for feedback. His wife was the first to leave the house, followed by his mother. Estranged and ostracized by the community, these deeply personal events, thankfully never even figured in Arunachalam’s single-minded pursuit to address the problem.

His breakthrough came in the form of a cheaper and re-engineered version of manufacturing the existing commercial product, cheaper and better. His invention and process won him the National Innovation Foundation‘s Grassroots Technological Innovations Award for 2006. Muruganantham’s idea, using the very same pine wood cellulose, 6 years of toil, trial and error and public ridicule resulted in a machine and a product that is now powering what he terms as the “Second White Revolution in India”.

Encouraging and exhorting women to organize and empower themselves, his start-up sells his machines that cost Rs 75,000 to rural women with the help of bank loans, as well as through NGOs and women’s self-help groups. Focusing on a woman-to-woman model from production to marketing, a packet of 8 sanitary pads by Muruganantham’s unit will cost Rs 10 to manufacture ( a generous estimate), and are as good as the conventional ones available in the market under popular brand names. His vision is to make India “a 100 percent sanitary-pad using country in my lifetime, providing not less than 1 million rural employment opportunities, and I am not running after this bloody money.”

Know more about Muruganantham and his life’s mission here.

Arunachalam Muruganantham at TED: How I started a sanitary napkin revolution!