In the 1990s, India stood at the cusp of liberalization, a gateway to rampant industrialization and material pursuit. A group of professionals, part of a Study Circle in New Delhi that meditated and deliberated on modern notions of ‘development’ and ‘success’, agreed that the Gandhian approach of minimalism was indeed the right approach to deal with the ills that plagued modern living.

According to them, science and technology had to work in tandem with human values for all-round inclusive progress. 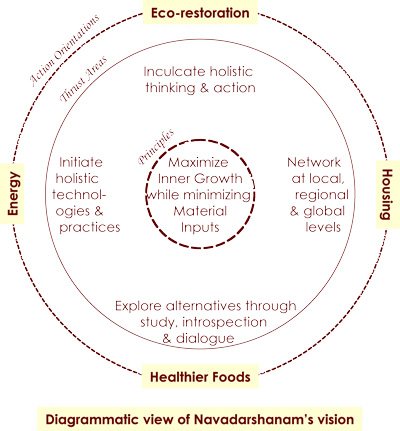 The Ashram of Swami Sahajananda, a textile engineer-turned-monk of the Chinmaya Mission, acted as the base to set up Navadarshanam. A 110-acre expanse of hilly, barren land bordering the Thally reserve forest, 50 km south of Bangalore along the TN-Karnataka border, was identified for the purpose. Today, this once-barren, unproductive piece of land is a lush sanctuary for plants, birds and thousands of trees. The eco-restoration is largely the result of letting nature have its way, by preventing cattle grazing and a thought-process that seeks an alternative to the ecologically and spiritually damaging modern practices.

The commune, run on principles of Gandhism relies entirely on solar power and has an organic farm to cater to the vegetable requirements. The kitchens operate using methane from two gobar-gas plants setup in the farm.The houses are built using an eco-friendly model (sun-baked bricks, red oxide flooring and no wall-plastering) and good crosswind flow ensures the interiors remain cooler. A windmill supplements the power requirements. The commune is entirely vegetarian; drugs and alcohol are strictly prohibited.

The focus of the commune’s activities is two fold: inner and outer. The outer focus is on Eco-Restoration, Organic & natural Farming, Food and Health and Alternative Technologies in the areas of housing, energy and cooking fuels.The inner focus is on personal inner development—purification of one’s mind of stereotypes and biases to expand one’s consciousness to facilitate an alternative lifestyle that feeds off minimalism and preservation of resources for judicious use. A Study Circle and library dedicated to development of alternative ideas forms the resource base for the commune and those interested in pursuing a technology non-dependent and non-material life.

Navadarshanam, being a self-sustaining commune, accepts no funding from agencies, national or international. It survives on donations from visitors and the 40-odd organic food products from the commune farm that are sold in Bangalore and elsewhere. Navadarshanam Trust Self-Help Group, consisting of 28 members of whom 21 are women, runs the organic food initiative.

Navadarshanam experiments with organic farming, eco-friendly housing, community living, alternative energy, and promotion of health food—concentrating on co-forestation and water & soil management, renewable energy. In pursuit of the goal of alternative life-styles that take into account ecological and spiritual perspectives, Navadarshanam is leading the way, showing us the way out of a moral darkness we have called upon ourselves.

An Organic farm on the lines of the Navadarshanam Commune