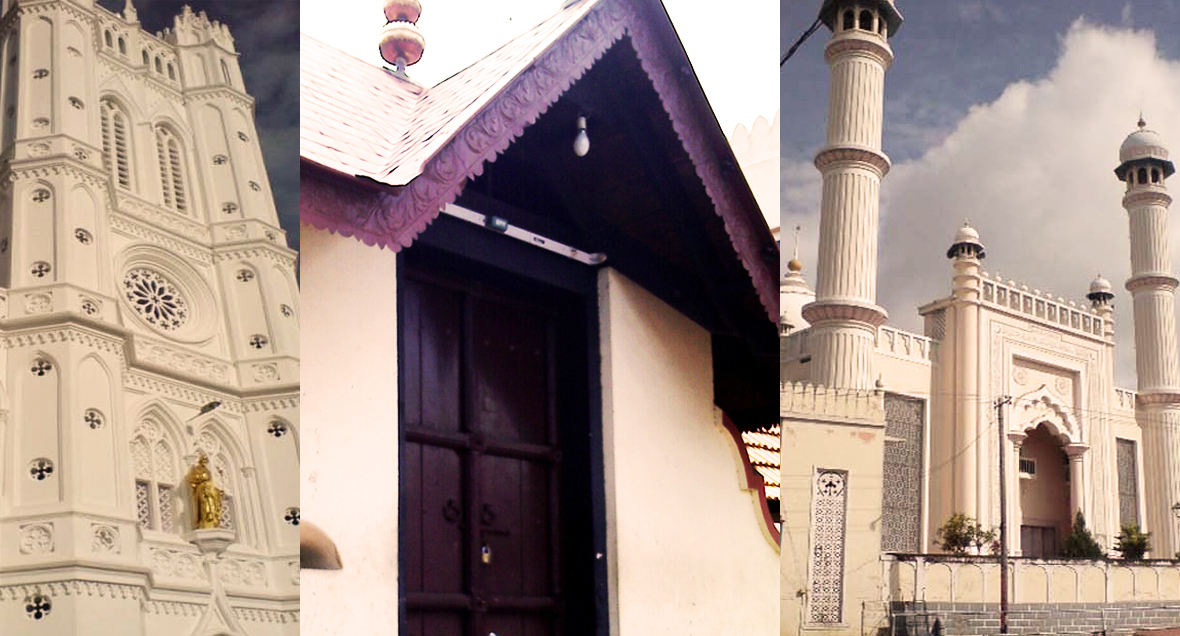 To say that the Palayam area is a bustling center in the city of Thiruvananthapuram would be an understatement. Just a stone’s throw away (for someone with a really good arm), from the nerve center of the state of Kerala – the Secretariat – Palayam is the “Marketplace” of Trivandrum. It is also chock-a-block with historic buildings, landmarks and centers of trade.

But beyond the winding streets of the Connemara Market and all the history, what you notice first about this place are the two massive edifices that tower over the busy intersection – The Juma Masjid on one side of the road and the St.Joseph’s Cathedral on the other. And sharing a common wall with the Juma Masjid is a Ganapathy / Ganesha Temple, directly opposite the gates of the Connemara Market.

The Juma Masjid in itself has a history unrivaled in its construction. The first Chief Engineer of Kerala’s Civil Works, TP Kuttiammu, took the initiative to renovate the mosque and the Chief Architect to the Government, J.C. Alexander designed the structure, the project being assisted by one of the city’s prominent building contractors, Govindan. It could only be an act of Providence that Govindan’s son Gopalakrishnan, then a AMIE school dropout, and an enthusiastic partner in the planning and design of the mosque, rose to become India’s master builder of mosques.

The very fact that you can take in all three places of worship in one glance in itself is an exhilarating vision & presence in this age when boundaries between people are being demarcated in thicker and bolder lines. And here we have a temple and a mosque, sharing a single wall.

It is not a rare sight here to see people step out of one place of worship (after submitting their petitions or expressions of gratitude, as the case may be, to the Powers), and enter the portals of the next one to repeat the process, in the belief that when the appeal is submitted to two or more Powers, their case turns stronger.

The nearness of all three places of worship, which has never struck the locals as odd has been a matter of admiration and appreciation from visitors to the capital city of God’s own country. The festivals and rituals of the respective religions have all been carried out peacefully for decades and no one has impinged upon the religious freedom of one or encroached upon the property of another. Followers of all three religions participate, contribute financially and co-operate wholeheartedly for the festivities of the others.

It is this air of communal harmony and peace the place emanates that makes the other great landmarks nearby – the Kerala University, the University College and the University and Public Libraries – such fertile breeding grounds of knowledge, art and culture.