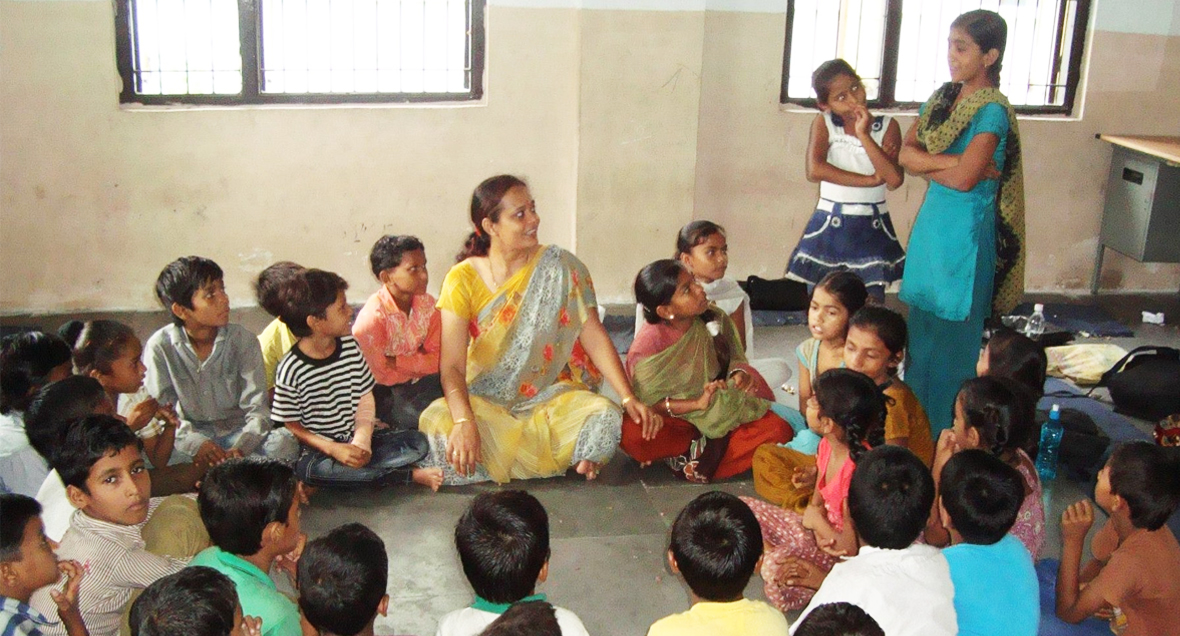 Beena Rao’s mission is to give free education to underprivileged-children.Her initiative ‘Prayas Free Coaching Classes’ was started in 2006 and sought to bridge a gap in delivery standards of present-day education in deprived neighbourhoods and slums of Surat, Gujarat.

Surat, also the ‘City of Flyovers’, is the 4th fastest developing city in India and world’s biggest diamond polishing hub. A port city, Surat is a model for 21st century fast track development. However, its biggest lacuna lies in quality primary school education.

The Right of Children to Free and Compulsory Education (RTE) Act, 2009, seeks to provide free and compulsory education of all children in the age group of six to fourteen years as a Fundamental Right. This has meant the lowering of learning standards in educational institutions all over the country.Courtesy this act, every child gets promoted to the next level irrespective of its academic performance. Parents seldom put any pressure on the their children any longer, and children rarely take any initiative to read and learn.

This gap in standards is most noticed in government schools frequented by underprivileged children and slum kids—lack of ambition and poor guidance leading to reduced attendance and non-compliance with academic standards. The children are more content to work in a daily-wage scenario than study because of the economic independence at a young age and the ability to contribute to their low-income household.

Beena Rao — a lecturer at Sardar Vallabhbhai National Institute of Technology—is inspired by her violinist father who teaches blind students for free in his spare time.Taking a cue from him, Rao wanted to make a large impact in the cause of education of deprived children and that is how the story of ‘Prayas Free Coaching Classes’ began. Along with her husband, she started teaching a few children in 2006 and, today, the initiative has grown to cover more than 5000 children in eight different locations of Surat.

Rao depends largely on volunteers to teach the children from 3rd to 8th grade and the funds for their wages (about 1500 Indian rupees)come from various quarters through donations or from Rao’s pockets. The classes are in the evening from 6 to 8 pm and the emphasis is on holistic development of the children with discipline and moral values forming the basic tenet of the education. Workshops are also conducted in areas like craft, science, yoga and sports for older children to help them find their core strengths and plan their career accordingly.

The transformation in the children is incredible. There is a rise in self-esteem and most of the children now desist from their slang and abuse ridden lingo. Their academic performance has improved considerably and most of them now attend school reducing the number of school dropouts. The books distributed by the initiative to the slum children has inculcated and improved their reading habits.

Rao has now registered the Sadamani Charitable Trust to enable kind-hearted individuals and organisations to make donations to the initiative. The infusion of funds will help to finance more classes and also make it motivating for volunteers who are paid a meager amount now for their efforts.Below-par achievement of underprivileged children remains one of the most pressing problems in education and Rao’s efforts have positively addressed this unhealthy achievement gap, making these children aim for heights unknown hitherto.