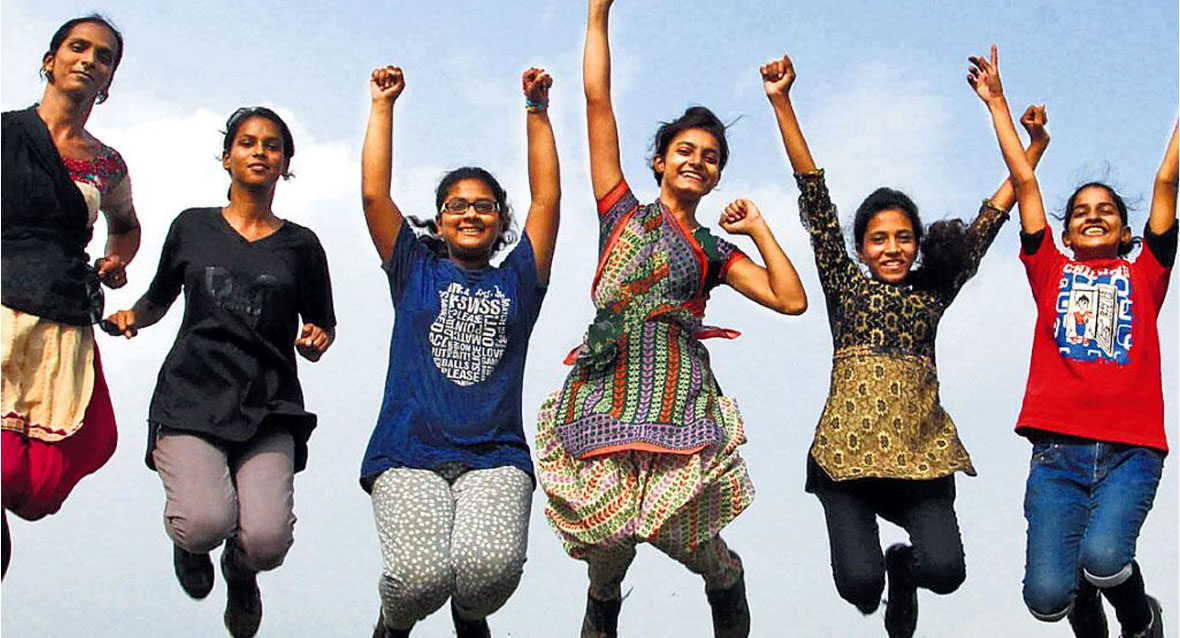 Situated 40 kms northeast of Mumbai, the town of Mumbra is named after Mumbra Devi—a goddess of the Koli and Agri fisherfolk tribes. A natural port, Mumbra has been a flourishing shipbuilding port from the 7th century AD. The local community is largely Muslim (80%) due to an influx of refugees after the 1992 Mumbai communal riots.

Though named after a goddess, Mumbra’s society has been generally indifferent to its women-folk. Almost the entire adult women population is unemployed, with 24% illiterate and 28% married off before they attain the minimum legal age of 18. The ultra-conservative social system has meant exclusion of women and girls from open spaces; an extreme instance being young girls not allowed to play football publicly in a male-dominated atmosphere.

Yet, because the love of the game cannot stifle any soul—male or female—a group of girls got together three years ago, in secret, to play football despite parental reservations. Mostly banking on excuses like tuition classes, these girls kept the secret going until their parents found out due to the constant sport injuries sustained by the blossoming players.

The arrival of an NGO, Magic Bus—which uses a sports-dominated strategy to engage children from disadvantaged backgrounds—changed the perception of the hijab-dominated society towards female football players. They helped the girls form Parcham—an NGO to address the issues of Mumbra’s Muslim women through education and extra-curricular activities.

Parcham—meaning flag in Urdu—is inspired by poet Majaz Lakhnawi’s lines that talk of how a hijab can be turned into a flag—symbolizing a revolution. Indeed, the women’s revolution had finally arrived in Mumbra.

The girls started playing football openly, coached by the NGO as girls-only teams for all age groups. Parcham distributed pamphlets in schools and colleges urging girls to participate in training. Many turned up for practice and the teams began to take part in local tournaments. Gradually, some parents and menfolk thawed in their outlook even though the majority thought otherwise.

The football team, initially, found it difficult to get an exclusive ground in Mumbra to train. After nearly three years of playing in makeshift grounds, also used by male players, the girls started a signature campaign to petition the local civic body for a ground of their own. Approximately 900 local girls endorsed the demand. Recognising the demand, the Thane Municipal Corporation took a radical and progressive decision recently to allot a 4000 sq.m plot for the Mumbra girl players, who are now dreaming of turning professional.

This landmark decision will not only influence other civic bodies to follow suit in helping reclaim open spaces for women, but also further the self-esteem of the Mumbra women. Their emancipation will eventually correct the continual suppression of women in a town named, incidentally, after a goddess.