Parimala Dhati was born in Mysore in 1927. Right from childhood, even though it was considered unnecessary for girls to go to school at that time, her family did not bar her from education. Her uncle, who was a versatile learner, gave impetus to her natural curiosity about things and taught her elementary things about astronomy, world history, mythology, English literature and world affairs in general. They lived in a joint family and her grandmother, who knew Sanskrit, would narrate stories from the mythologies, scriptures (Upanishads) and so on. She grew up to be a knowledge buff, absorbing whatever she could. She graduated with B.A.(Hons) in English Literature in 1947. She still is a voracious reader and has become a compulsive web browser of late!

I heard about the ‘Walk of Hope’ initiated by Sri M, which is well on its way to cover 7500 km from Kanyakumari to Kashmir for the cause of peace and harmony. I heard about it first from my daughter-in-law, Jaya Kaushik, and some of my friends and family have even participated in it. As I heard and read more about it, it set me thinking. 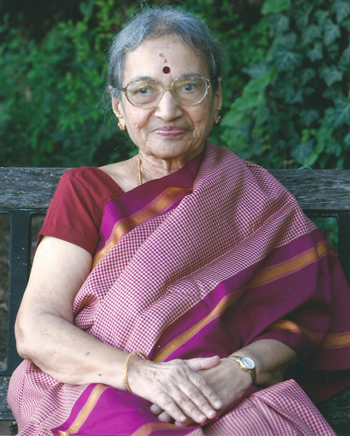 The earliest memories of my childhood revolve around an explosion of colours and sounds. After a while, when I could grasp the meanings and distinguish the variety of colours, confusion gave place to wonder.

We spoke Tamil at home. Outside the house, the language was Kannada. We lived in the state of Karnataka. Some of our neighbours spoke different languages like Telugu, Marathi, Malayalam and so on. So did the succession of maids we had. Our handyman called Singlu spoke Hindi.

All this was too much for a five-year-old mind. So, I asked my grandpa from where these peoplehad come. We kids took all our problems to grandpa, who had the patience to listen to our, attimes, silly questions and answer them convincingly. He told me, “I am glad you asked me. Itis good to know these things. All these people belong to India. India is our country. It consists ofseveral parts, each with its own language and customs. But they are all parts of one country, that is India.” This explanation was rather nebulous. But I left it at that. I did not know what a ‘country’was.

A clearer picture emerged in school with the introduction of the basics of Geography. India took a concrete shape and the “parts” were coloured differently in the map. Further on, after a few lessons in Geography and History, my perception became clearer.

With adulthood and a developed reasoning power, it all became evident but another confusion started. We learnt through History that India was subject to several alien invasions—both violent and otherwise. Talking of pre-Christian and pre-Islamic eras, we had barbaric hordes like the Huns and those led by Genghis Khan invading this land. These turned out to be transient. The other kind was that of refugees seeking a safe haven from persecution. The earliest example is that of the Jewish community arriving on the shores of India. Christian communities that had garnered dominance in Emperor Constantine’s time were persecuting Jews all over the world for causing the death of Jesus Christ. Constantine, the Roman Emperor, patronised Christianity and adopted the hitherto insignificant faith as the state religion for political reasons. The Jews were accepted and accommodated in India and had every freedom to practise they faith in their own way.

Prophet Mohammed founded Islam in the 7th century AD. Popular in its following, it started spreading rapidly in the Middle East during this time. The Zoroastrians or ‘Parsis’, as they are known, were natives of Iran (formerly Persia) and had to face invasions by the Islamic Arabs. The Parsis were fire-worshippers and, to escape the brutality of the invaders and protect their religious faith, a section of them left Iran secretly and arrived in India. The Hindu rulers of the area gave them shelter and protection for their faith. This small community hascontributed enormously to the development of India. Many harassed people, apart from these,found a safe haven in India. The more recent ones are the Tibetan Buddhists from China (erstwhile Tibet) and refugees from Bangladesh and war-torn Afghanistan.

So, apart from the original Hindu community, which itself was composed of several sects with slightly different ideologies,these immigrants also blended harmoniously into the Indian society.

India was a politically fragmented nation until British imperialism hammered it into the semblance of a nation. It consisted of umpteen principalities and fiefdoms, constantly at war amongst themselves. Even before colonisation, India had an identity as a nation. The intriguing question was—how did this hotchpotch of a squirming, bickering humanity with diverse beliefs, habits and customs, manage to stay together? The bond that kept them together must have been very strong indeed.

What was this bond? For an answer to this question, we will have to go back to the very roots of Indian civilization. It is said that the Vedas, the core scriptures of Hinduism, go back to a hoary antiquity. Their contents were passed on orally from generation to generation. The person who is said to have organised and given shape by scripting them was Krishna Dwaipayana. He is known as Veda Vyasa for doing this monumental work. He is also credited with the authorship of 18 massive tomes known as the ‘Puranas’ (ancient chronicles) consisting of mythological lore. On eof the two important epics, ‘The Mahabharata’ is attributed to him while the other one the‘Ramayana’ owes its existence to Valmiki.

Veda Vyasa assigned the task of training storytellers to one of his direct disciples, Vaishampayana.The storytellers were known as Sootha Pouranikas as they chose tales of the exploits of heroic men and women from the epics and the Puranas. They would travel the length and breadth of the subcontinent, entertaining both masses and classes alike with their skillful renderings of the tales. They spread out and seeped into the grassroots levels too, as local bards and entertainers adapted them to local languages and interests. They were absorbed into folklore, street plays and musical compositions in such a way that, in course of time, there was not a soul who did not knowabout Rama, the Prince of Ayodhya, or the antics of Hanuman, the monkey god who is beloved tochildren, or Krishna who mesmerised the people of Mathura and Brindavan. They were admiredand absorbed into the ethos of the diverse communities that inhabited India, which gave them a sense of unity.

Later came the saints and philosophers like Vallabhacharya, NarsiBhagat, Chaitanya Mahaprabhu, Jayadeva, Ramakrishna Paramahamsa, Meera Bai, Surdas, Namdev, Tukaram, Jnaneswar innorthern parts of India and AdiShankara, Ramanujacharya and Madhvacharya in the south who reinforced this bond. Many of them undertook marathon journeys to cover all areas of India and of course, they had to walk as mechanical transport and roads did not exist in their time. Adi Shankaracharya, born in Kerala, is said to have covered India from Kashmir to Kanyakumari several timeson foot and established monasteries in four corners of the country.Later on, Swami Vivekananda continued this invaluable tradition. In recent times,Mahatma Gandhi took up this beacon and toured extensively on foot to know his countrymen better and unite the masses of India against British Imperialism.

The Walk of Hope is the latest development in this long lineage of unifying initiatives, on a purely secular basis to eliminate the rot of casteism and sectarian thinking from our society. This is the most laudable outcome of a long-standing tradition and needs recognition and appreciation.

My daughter-in-law, Jaya Kaushik — a travel professional — has had a first-hand experience of the Walk during its progress through Bengaluru and she shared details of how she was drawn to the edifying endeavour: “My colleague called me one day and told me about the Walk of Hope. She said she had seen the news on TV about Sri M walking from Kanyakumari to Kashmir. I then went to the Walk’s website and started following the daily journal. I found it very interesting and spoke to my husband about it. My colleague, husband and I decided to join the Walk when it reached Bengaluru. It was an experience like no other. We did not get into any exercise regime or anything to prepare for the Walk. We knew it would be a long walk of at least 20 km and had no idea how we were going to do it. Come to think of it, I feel lazy even to walk to the stores nearby to buy provisions. But, gosh, the miracle of group dynamism sure does work. We were thrilled to participate in the programme at the Mahabodhi Centre, and before we knew it, the group of walkers had already reached Anand Rao Circle. I was surprised by the fast pace and we tried hard to keep up. The arrangements were fantastic; the breakfast served at Chowdiah delicious. The logistics were well looked after. The detailed planning that has gone into organising this walk is unbelievable. I joined it for a lark, but believe me, I am really motivated by the vision behind it and plan to join the Walk again in Madhya Pradesh.”

The ‘Walk of Hope’ promises to achieve the task of uniting all human beings—irrespective of caste, community, religion and such man-made divisions, and spread the message of peace, harmony and tranquility. Let us congratulate the organisers and participants of this event and wish them success in this magnificent effort!