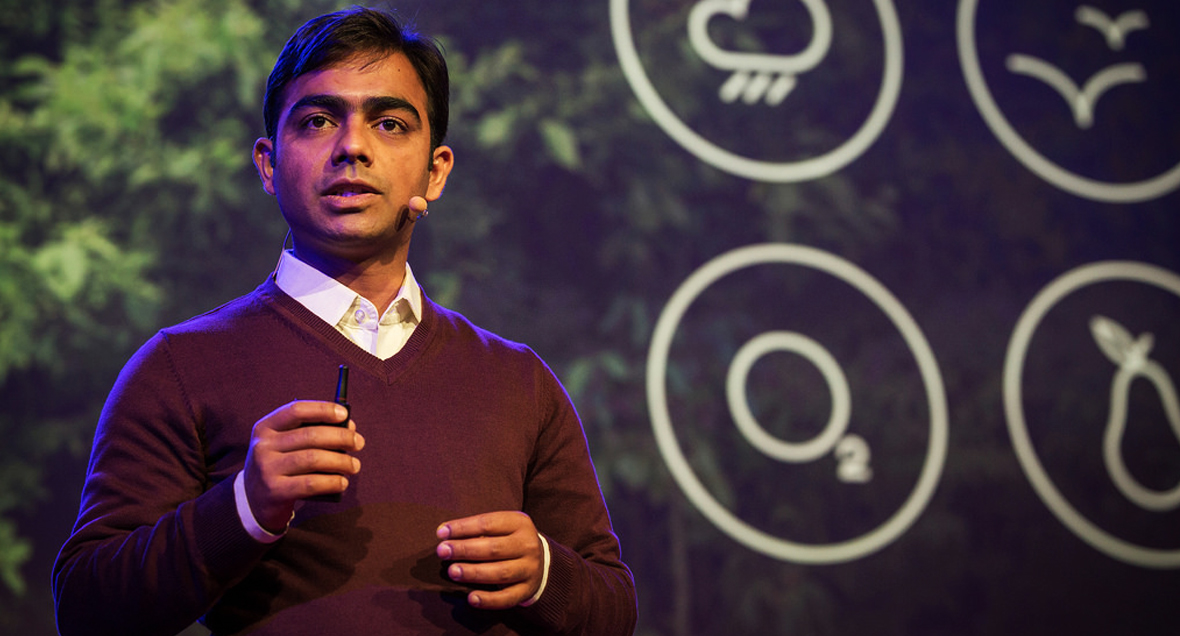 In 2011, Shubhendu Sharma quit a high-profile job at the Toyota plant in Bangalore to start Afforestt — a unique initiative that will create forests across India and the world totaling billions of trees in the next decade.

Ashoka, TED and Ink Fellow, Sharma draws his metaphors from his former job to highlight a global problem — every minute 114 cars are produced globally and, in the same time, forests spanning 36 football fields disappear from the face of earth.He goes on to add that we can certainly do without cars but not without the green cover that forms the basis of life itself.

Based in Bangalore, Afforestt seeks to replenish the lost forests on an accelerated basis using a low-cost model.The technique of creating forests, based on the Miyawaki Method, is so revolutionary that it can create a 100-year old forest in just 10 years. An acre of land can support a forest of 6000 trees.Creating a self-sustaining forest in one’s backyard just takes couple of years, improving the oxygen content in the atmosphere by 30%.

Sharma’s eco-entrepreneur plans bloomed at Toyota in 2008 when he attended a talk by Dr Akira Miyawaki—a Japanese botanist and winner of the Blue Planet Prize—who came to Bangalore to plant a forest on the campus. Miyawaki, 87 year old, has been responsible for planting more than 40 million trees in over 40 countries in his lifetime using his alternative method of afforestation. The Miyawaki Method places an emphasis on restoring native forests—using indigenous species that are best suited to the topography and climate of the area.

Afforestt, a for-profit eco-venture, uses a much cheaper variation of the Miyawaki Method that was researched and developed by Sharma. His first attempts were made at his 93 sq.mtr backyard in Uttarakhand and he was able to successfully grow a green forest within a year. Seeing the positive results, he quit Toyota to start operations on a commercial scale—building mini-forest ecosystems in limited time and with minimum investment for clients ranging from farmers to businesses and civic bodies.

The modus operandi starts with soil testing to identify the nutrition lacked by the soil. Then, the plant species local to the location and climate is identified. Suitable biomass availablelocally (within 50 kms) like cattle manure is then identified to nourish the soil. The soil is then loosened up using heavy machinery to a depth of one meter and saplings are planted, packing them together densely, roughly 3-5 saplings per square meter.

The forest grows densely and within a space of 8 months, sunlight cannot penetrate the green cover. The forest goes into a self-preservation mode as a result, saving every drop of water and dry leaf that can be converted to humus.Fighting for sunlight accelerates the growth of trees, resulting in faster generation of forest cover.

Afforestt is currently developing a crowd-sourced software that will include a miniature, GPS enabled probe to test soil remotely by uploading the results to the central server so that his team will be able to recommend the right local species of trees and plants and the requisite nutrients for enriching the soil.

Sharma wants afforestation to grow as an industry and a beacon of sustainable living. He has so far planted 43000 trees for 33 clients—17 natural forests in five different cities. The clients include his former employer, Toyota, which engaged him to grow a forest at its Pune plant. Using a DIY (do-it-yourself) model, he is now motivating the public, especially the youth, to easily grow a forest in their backyard.

Sharma’s vision is to restore entire lost forests.These forests will stimulate preservation of water supply sources, purification of water, disaster mitigation and environment protection leading to a broad-spectrum healing of the environment—earning brownie points for the sustainable living campaign.

Leave a Reply to pramod

Leave a Reply to pramod