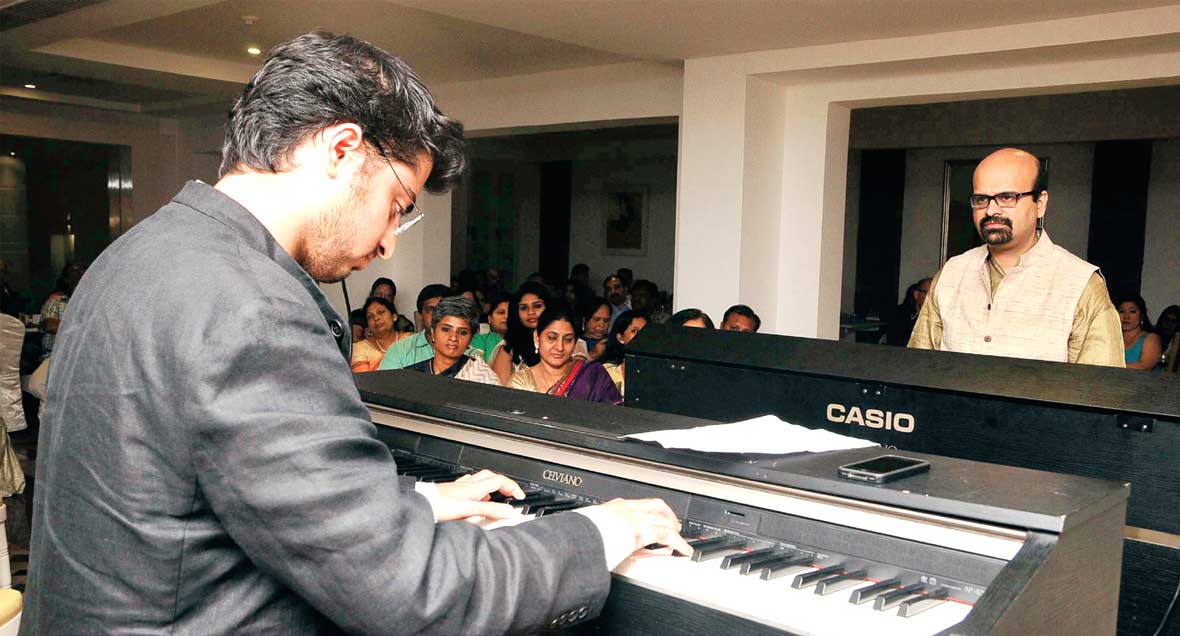 On Facebook, the first-of-its-kind music concert ‘Keys to India’ elaborates on its unifying goal: “We will bring together our highly individualistic styles as a gesture towards cultural unity, towards bringing people, communities, religions and ideologies, closer.

Curated by Chennai-based Aalaap, the architects of this musical initiative are classical pianist, Anil Srinivasan, and jazz pianist, Sharik Hasan.

From August 7 to 30, 2014, this pianist-duo held six concerts in Bangalore, Chennai, Hyderabad, Ahmedabad and Delhi—involving two pianos playing simultaneously to explore the genres of classical and jazz music from around the world. As the duo puts it, “The unique idea of two pianos coming together bridging different musical traditions is a first of its kind anywhere in the country.”

37-year-old Anil Srinavasan, a classical pianist from Chennai, was educated at the University of Southern California and at Columbia University, New York. Born into a traditional South Indian family, he was acquainted with Carnatic music from a young age. He trained in Western classical piano from age 3, making him a virtuoso in both forms of classical music. Awarded the Ustad Bismillah Khan Yuva Puraskar by Sangeet Natak Academy in the ‘creative and experimental music’, Anil’s recent collaborations have been with Sikkil Gurucharan, the Dhananjayans, Unnikrishnan, Chitravina, Ravikiran, Lalgudi Krishnan and U Srinivas, spread across India, Singapore, Australia, USA and Europe.

Sharik Hassan, 23-year-old from Bangalore, began playing at age 5 and was educated at the Bill Evans Piano Academy in Paris, with a master’s degree from the Manhattan School of Music in 2014. Now living between two cities, New York and Bangalore, he has performed at venues all over the world including the Panama Jazz Festival, Nancy Jazz Festival (France), Lincoln Center (New York), sharing the stage with John Patitucci, Joe Lovano and David Liebman among others.The Hindu newspaper hails Sharik’s music as “never less than brilliant at any time! ”.

‘Keys to India’ was staged with five themes of music—nature, romance, the human condition, identity and nationhood—totaling 90 minutes. The culminating piece drew on Vande Mataram — performed in different styles of classical and jazz. Anil says: “The main reason we’re holding this event is to show people that music has no boundaries — Sharik and I belong to two different communities, but it doesn’t matter. What matters ultimately, is the celebration of art.”

The events showcased classical and contemporary music that transcended religion and ethnic identities. The pianists used an improvisational approach and did not rehearse for the concerts. While they played many of their own compositions, responding to each other in a style rooted much in the moment as the concert progressed, the resultant music took on a global hue though deeply rooted in Indian music. The collaboration drew in thousands of spectators to the public concerts—the one in Chennai being a midnight show on Independence Day.

The concerts were Anil’s idea and he approached Sharik in the beginning of 2014. As it transpired from their discussions, it was all about creating a greater sense of unity in the country; besides equality among the sexes and religion. A concert seemed the ideal occasion since hundreds are gathered in one place and the collective experience is akin to a bonding force.

The concert series had its own share of detractors — fundamentalist outfits threatened them to shift the focus of the concerts away from harmony and goodwill — the underlying theme of the initiative. Yet these reactions only encouraged the pianists, providing justification for the relevancy of such unifying events. “Keys to India”, the concert’s name, in fact originated from the idea of keys of two pianos coming together — a metaphor about the nation’s unity derived from its plurality.

Keys to India by Anil Srinivasan and Sharik Hasan