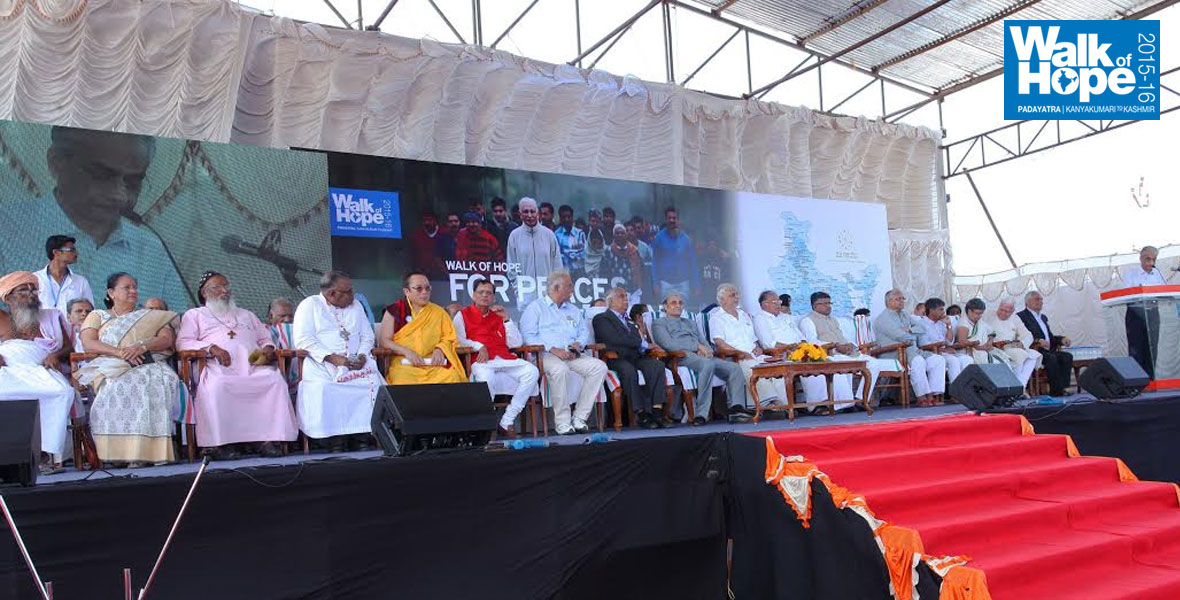 Today morning, Sri M, along with some dignitaries visited the Swami Vivekananda Rock to garland the statue of Swami Vivekananda. Incidentally, 12 January is also the birth anniversary of Swami Vivekananda, a great prophet of interfaith harmony. It is on this rock that Swami Vivekananda found enlightenment on his life’s mission in 1892: to arouse the nation from its dismal slumber of a thousand years of slavery and rediscover its past glory. Today, Sri M also began his mission from the same point; taking in the whole of India as it were, from that vantage point—a mission for peace and harmony spanning 6500 kms through 11 states, 86 districts and reaching 10 million people.

The makeshift assembly hall hosting the flag-off journey, set amidst picturesque environs by the seaside, also marks the beginning of the national highway starting from the southern-most point of peninsular India, aptly named Zero Point. Complemented by assertive winds from the sea, the brilliant morning and its spectacular sunshine set the mood and tempo of a day of profound significance in the history of India.

09:30 am: The flag-off ceremony began with Sri. Kanta Prasad Mishraji’s mellifluous bhajans and songs celebrating the unity of the country, accompanied by his sons Rajnish Mishra and Vishal Mishra, with Rajnish playing the table and Vishal playing the sitar.

Following this were the Kabir bhajans by Padma Shri PrahladTipaniya, one of the most compelling folk voices of Kabir in India today, who combines singing and explanation of Kabir bhajans in the Malwi folk style from Madhya Pradesh. He was accompanied by a group of tambura, khartal, manjira, dholak, harmonium, timki, and violin players.

11.00 am: The hour started with an invocation by Tara Kini and Team. This included Kabir Dohas and bhajans, sung in languages to represent the states through which the Walk of Hope is traversing.
The dignitaries were then requested to occupy the dais.

The following dignitaries were subsequently felicitated by Sri M.

Chief Guest: Padma Vibhushan Dr. Karan Singh, MP, Rajya Sabha, the youngest-ever member of the Union Cabinet in 1967, holding the portfolios of Tourism and Civil Aviation. He is a senior member of the Indian National Congress Party who served as Governor of Jammu and Kashmir and received the Padma Vibhushan in 2005. Dr. Karan Singhhas been closely associated with SriM and his social initiatives– the Sarva Dharma Kendra, Manav Ekta Mission and The Satsang Foundation.

– Sri P J Kurien, Deputy Chairman of Rajya Sabha. He has served previously as the Chief Whip, Congress Parliamentary Party and a Union Minister of State.

– Sri. Ravishankar Prasad, Union Minister for Communications and Information Technology, Government of India. He was also Minister of State in the previous NDA government, and a senior advocate of Supreme Court.

– Sri. Pusapati Ashok Gajapathi Raju, Union Minister of Civil Aviation,Government of India. He is also a politburo member of the Telugu Desam Party.

– His Excellency Tai Situ Rinpoche, main Guru of H.H. the 17th Karmapa, is one of the highest-ranking lamas of the Karma Kagyu lineage and is a scholar, poet, calligrapher, artist, author, architect and geomancer.

– Sri. Rajagopal P V, Gandhian activist, is Vice Chairman of the Gandhi Peace Foundation and the president and founding member of Ekta Parishad.

– His Grace. Dr Thomas Mar Athanasius, Metropolitan of the Diocese of Kandanad East, Malankara Orthodox Syrian Church was was the President of Kerala Council of Churches till 1998. Dr Athanasius is a known author, social worker and a philanthropist.

– Smt. V R Devika, Gandhian and Social Activist is founder and Managing trustee of The Aseema Trust, a nonprofit organization for linking traditional performing arts and education and Mahatma Gandhi for schools.

– Padma Bhushan Sri. Bindeshwar Pathak, Founder of Sulabh International, is a pioneer in social reform, especially in the field of sanitation and hygiene, and Winner of Stockholm Water Prize.

– Ambassador Ashok Sajjanhar, Secretary, National Foundation for Communal Harmony(NFCH) is a career diplomat. He has served as India’s Ambassador to Kazhakstan, Sweden and Latvia and is, currently, a Visiting Professor at the Centre for Research in Rural and Industrial Development

– Dr.Prithika Chary is the first and only lady in India to be qualified and practicing as both Neurophysician and Neurosurgeon. With a teaching experience spanning 36 years, she is involved in many social causes, especially those empowering and enabling girl children, women, the less abled and the economically underprivileged.

– Sri. Prasanna Kumar Pincha, Former Chief Commissioner for Persons with Disabilities. A Disability Rights Activist of caliber, ShriPincha is a former Founder Principal of the Government Institute for the Blinds in Jorhat, Assam and Former Joint Director of Social Welfare of Government of Assam

– Sri. Ezekiel I Malekar : Ezekiel Isaac Malekar is the head of the Jewish community in New Delhi, India. He is the Honorary Secretary of the Judah Hyam Synagogue and is a noted human rights activist and a Deputy Registrar (Law) with the National Human Rights Commission in India

– Sri. Pattathu Ayya Bala Prajapathi Adikalar, Head of Ayyavazhi. He was also awarded the Kottai Ameer award for communal harmony by the government of Tamil Nadu in 2003.

– Padma Shri Prahlad Tipaniya is one of the most compelling folk singers of Kabir in India today who combines singing and explanation of Kabir bhajans in the Malwi folk style from Madhya Pradesh.

– Sri. Kanta Prasad Mishra was born in a traditional musical family of Tabla Maestro Late Pt. BundiMaharajJi and He has been performing as a Harmonium Accompanist with the Vocalist Duo Padmabhushan Pt. Rajan&Sajan Mishra Ji.

– Dr. Chandrakant Pandav is currently Professor and HOD at the Centre of Community Medicine at the AIIMS, New Delhi.

The chairman of the Kerala Advisory Committee of Walk of Hope, Sri K Jayakumar, IAS (Rtd), Vice Chancellor, Malayalam University introduced Sri M to the dignitaries and audience in a moving tribute.

The audience was then shown the Walk of Hope short film, an interesting message from Sri M explaining the reasons behind the Walk of Hope amidst strong evocative visuals invoking peace and harmony.

Then, the ceremony moved to the felicitation speeches by the dignitaries.

Some extracts from the speeches :

• Sri PJ Kurien, Deputy Chairman of Rajya Sabha, said that Sri M is a great son of India who has discovered the soul of India. Elaborating on the Walk, he appealed to everyone to understand that the ‘truth is one, but humanity calls it by different names’, that we must respect our differences yet be united for the cause of humanity.

• Padma Vibushan Justice M N Venkatachaliah, Former Chief Justice Of India, said that a great civilization like India should be known by its ability to value the spirit of unity. He prayed that the Walk of Hope would give rise to a better India with a just and caring society.

• Sri. Ravishankar Prasad, Union Minister for Communications and Information Technology, dwelt upon the influence that Sri M’s memoir “Apprenticed to a Himalayan Master—A Yogi’s Autobiography” had on several years ago when it was launched. He said that 12th January 2015 is an extraordinary day in India’s awakening and fervently prayed that sublime wisdom will arise during Sri M’s padayatra.

The felicitation speeches were followed by the Address by Chief Guest, Dr. Karan Singh.Dr.Karan Singh dwelt upon the day as one of profound significance. He brought attention to the Walk starting from Kanyakumari, the southern most point of India on the birth anniversary of Swami Vivekananda. He added that the extraordinary presence of Sri M would involve lakhs of citizens in this initiative by the end of the walk. He pointed out that for India, this was a period of considerable difficulty. It is only by such cooperative and inclusive venture, that a dialogue between communities could be initiated so as to reflect diversity and pluralism. The goal is a new India, a new society, and a new world transcending our differences and becoming a single, cooperative unit. Then, Sri M addressed the gathering.

Sri M spoke very briefly. He began with his faith that every true citizen of this country thinks of himself as Indian deep inside. He then elaborated on the Vedantic principle of every individual possessing a potential divinity at his or her core that can be manifested. With the Walk of Hope, he hoped that India would be able to show the world a spiritual example. He ended with a note that he would rather ‘walk’ than ‘talk’ with the intent of ‘walking the talk’.

The ceremony now moved to the interfaith prayers offered by the dignitaries to bless the walk and dwell upon inter-faith harmony.

Representatives of Hinduism, Islam, Christianity, Buddhism, Jainism, Sikhism, Bahai Faith and Judaism faiths offered interfaith Prayers. An epitome of the grand unifying vision of Sri M, the session of interfaith prayers was a moving moment. As representatives of faiths came together, under one roof, to provide strength and encouragement to a grand mission for peace and harmony, all the hearts and voices in the hall became one, a sea of humanity singular in zeal and determination to grow larger than our petty differences and uniting to realize a promising future.

Dr. Chandrakant Pandav, currently Professor and HOD at the Centre of Community Medicine at the AIIMS, New Delhi, proposed the vote of thanks.

02: 15 pm: The post-lunch session began with the Hanuman Chalisa, a 40-stanza Hindi devotional poem to Hanuman by Tulsidas, sung by Krishna Das (born Jeffrey Kageland), an American vocalist known for his performances of Hindu devotional music.

This was followed by a musical performance “Music for Hope” by Aisha Ali and Akash Chopra. The performance included a Sufi adaptation of Kabir Das, a symphonic rendition of ancient religious languages known as the Music for Hope, and finally the energetic and soulful official anthem music for the walk of hope called ‘Chal Chalen’. The audience and the dignitaries joined in one voice with the resounding strains of the soul-lifting performance.

Sri M then invited the Guests of Honour to garland the statue of Mahatma Gandhi on the stage. The proceedings finally culminated with the National Anthem.

Sri M then lead the dignitaries to the Starting Point of the Walk of Hope, just outside the assembly hall at Zero Point on NH 7. Sri M sprinkled the water—a mix of water collected from the River Ganga and also from the confluence of the three seas- Arabian Sea, Indian Ocean and the Bay of Bengal in Kanyakumari—to bless the Walk. K Subash, Tamil Nadu State Coordinator, Walk of Hope handed over the Manav Ekta Mission flags to Sri M.This was followed by Sri M handing over the Manav Ekta Mission flags to the Guests of Honour.

The Chief Guest, Dr. Karan Singh, handed over the National flag to Sri M and also flagged off the padayatra.

03:20 pm:The Walk of Hope started off immediately, led by Sri M and a vast sea of supporting walkers, resplendent in whites and carrying the flags of Manav Ekta Mission. The highway was filled with the walking group of well wishers, devotees, volunteers and supporters marching as one—step by step, hand in hand, for India.