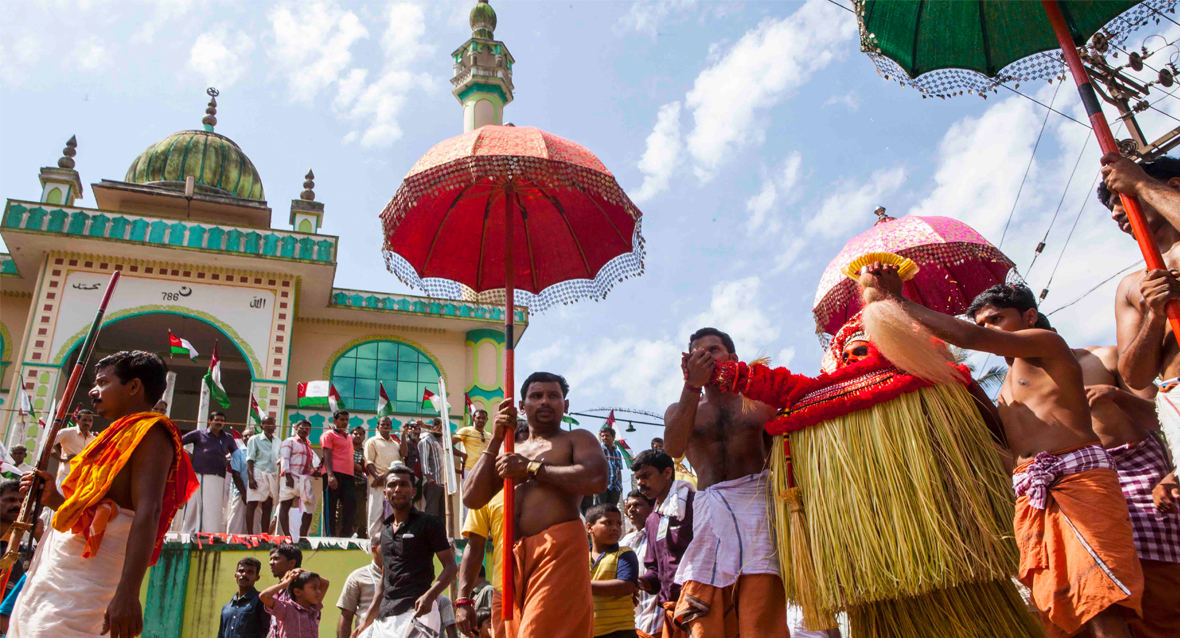 As the gentle February sun arcs above the Thejaswini River, the sleepy village of Perumbatta on its banks comes alive with the beats of Theyyam. Perumbatta, 25 kms from the town of Kanhangad in Kasargod District, Kerala is today a formidable symbol of communal harmony.

Situated in a region that has been politically volatile and divisive for long, Perumbatta’s community — mostly Hindus and Muslims — have co-existed amicably for the last 150 years. Primarily responsible for this exceptional state of affairs is the existence of a temple and mosque in close proximity — just a stone’s throw away.

Once in three years, the Sri Padarkulangara Bhagavathy Temple and Munirul Islam Juma Masjid together conjure up a spectacle that defies all conventional divisions of faith — bringing together minds and hearts to an enlightening state of camaraderie. Situated adjacent to the river, the temple plays host to a triennial festival known as the Perunkaliyatta Maholsavam. The festival,spread over three days, starts on the first day of the month of Kumbham (Aquarius), according to the Malayalam calendar.

The Vishnumoorthy Theyyam — a Theyyam enactment based on the Narasimha avatar of Lord Vishnu — is the primary ritual of the temple festival.Theyyam is a prevalent ritual form of worship in North Malabar; its broad canvas features the altruism of devotees, associated rituals, vocal and instrumental music, intricate face and body art, historic customs and a communal ambience.

On the last day of the festival, the Theyyam (always performed by men) makes a customary trip to the nearby mosque. The Hindu Theyyam artiste — considered the very voice and presence of God as he attains an other worldly trance to the accompaniment of reverberating drums — steps into the sanctum of the mosque.

The Imam and the mosque committee members, with a bonhomie and revelry unheard of, welcome the Theyyam. Once inside the mosque, the Theyyam ascends a heap of rice – grain spread on the floor and communes with the resident divinity in the characteristic ethereal voice. In the olden days, the prevalent practice involved the Theyyam walking over heaps of reaped paddy on the way to the mosque. The heap of rice on the mosque’s floor in contemporary times is symbolic of this past tradition.

Before returning to the temple, the Theyyam gently exhorts the Muslims present to practice their Ṣalāt — the five obligatory Muslim prayers in a day — without fail in all earnestness. This rare yet blessed moment of harmony and social cohesiveness is witnessed by hundreds of people from all over the region.

It is fascinating to see the active participation of Muslims in the temple festival committees—helping with the planning and execution of the festival activities. The local Muslim community also donates the rice meant for feeding the devotees during the festival.

The Perunkaliyatta Maholsavam is more of a wake-up call to all of us — to forget our petty religious differences and celebrate jointly each other’s festivals and make India a united and resurgent nation to reckon with.